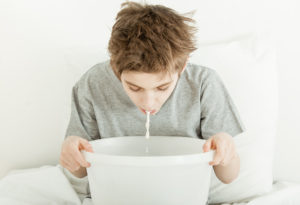 Vamana Karma, primarily a Samshodhana Karma (detoxification procedure) is one of the five Pradhana Karmas (chief procedures) of Panchakarma.

Vamana Karma means induction of emesis. It is a procedure in which Doshas (waste products or toxins) are expelled out of the body through oral route. Emesis therapy, cleanses Kapha collected in the body and decongests the respiratory tract.

Literally, Vamana Karma means to persuade therapeutic vomiting or expelling out the contents of the stomach including vitiated Doshas through oral route, which is indicated for the purification of Urdhwa Bhaga (upper part) of the body.

In Vamana, specially the Kapha and Pitta Dosha brought to Amashaya (stomach and duodenum) from all over the body by the specific pre-operative (poorvakarma) procedures and then eliminated out by inducing the emesis. It is the detoxifying procedure that should be performed only after doing snehan (both internally and externally) and swedan.

As a preventive measure, Vamana in is done in Vasanta ritu ~ spring season, approximately in the month of March and April for the elimination of vitiated Kapha Dosha which in turn helps to prevent the forth coming Kapha disorders and associated Pitta disorders.