Parkinson’s disease (PD) is a degenerative disorder of the central nervous system. The motor symptoms of Parkinson’s disease result from the death of dopamine-generating cells in the substantia nigra, a region of the midbrain; the cause of this cell death is unknown. Early in the course of the disease, the most obvious symptoms are movement-related; these include shaking, rigidity, slowness of movement and difficulty with walking and gait. Later, cognitive and behavioral problems may arise, with dementia commonly occurring in the advanced stages of the disease. Other symptoms include sensory, sleep and emotional problems.

Parkinson’s disease is often defined as a ‘Parkinsonian syndrome’ that is idiopathic (having no known cause), although some atypical cases have a genetic origin.

The progression of Parkinson’s disease and the degree of impairment vary from individual to individual. Many people with Parkinson’s disease live long productive lives, whereas others become disabled much more quickly. Premature death is usually due to complications such as falling-related injuries or pneumonia.

Modern treatments are effective at managing the early motor symptoms of the disease, mainly through the use of levodopa and dopamine agonists. As the disease progresses and dopaminergic neurons continue to be lost, these drugs eventually become ineffective at treating the symptoms and at the same time produce a complication called dyskinesia, marked by involuntary writhing movements. Diet and some forms of rehabilitation have shown some effectiveness at alleviating symptoms. Surgery and deep brain stimulation have been used to reduce motor symptoms as a last resort in severe cases where drugs are ineffective.

Parkinson’s disease is the most common form of Parkinsonism and is usually defined as “primary” Parkinsonism, meaning parkinsonism with no external identifiable cause. 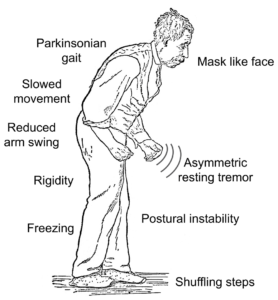 The primary symptoms of Parkinson’s disease are all related to voluntary and involuntary motor function and usually start on one side of the body. Symptoms are mild at first and will progress over time. Some individuals are more affected than others. Studies have shown that by the time that primary symptoms appear, individuals with Parkinson’s disease will have lost 60% to 80% or more of the dopamine-producing cells in the brain.

Characteristic motor symptoms include the following:

While the main symptoms of Parkinson’s disease are movement-related, progressive loss of muscle control and continued damage to the brain can lead to secondary symptoms. These vary in severity, and not every individual will experience all of them. Some of the secondary symptoms include:

Most people with Parkinson’s disease have idiopathic Parkinson’s disease (having no specific known cause). A small proportion of cases, however, can be attributed to known genetic factors. Other factors have been associated with the risk of developing PD, but no causal relationship has been proven.

An early and accurate diagnosis of Parkinson’s disease is important in developing good treatment strategies to maintain a high quality of life for as long as possible. A physician will diagnose Parkinson’s disease from the medical history and a neurological examination. There is no lab test that will clearly identify the disease, but brain scans and other laboratory tests are sometimes used to rule out disorders that could give rise to similar symptoms.

Patients may be given levodopa and resulting relief of motor impairment tends to confirm diagnosis. Individuals may sometimes be misdiagnosed as having another disorder, and sometimes individuals with Parkinson-like symptoms may be inaccurately diagnosed as having Parkinson’s disease. It is therefore important to re-evaluate individuals in the early phase on a regular basis to rule out other conditions that may be responsible for the symptoms.

The finding of Lewy bodies in the midbrain on autopsy is usually considered proof that the patient suffered from Parkinson’s disease. 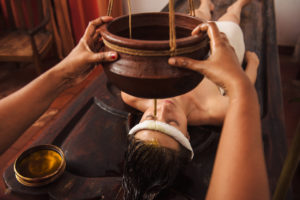 The syndrome was comprehensively described by James Parkinson in 1817 (An Essay on the Shaking Palsy). But the review of much early literature of Ayurveda date back as far as 5000 BC would show that syndrome strikingly similar to Parkinsonism was already known including the treatment with the seeds of a plant containing therapeutic levels of what is today known as levodopa apart from several other preparations. It is known as “Kampa vata”.

According to Ayurveda, most of the diseases of the Vata are essentially the conditions of degenerative diseases of the nervous system. Kampa vata is one such condition caused by imbalance of Vata. The treatment of ‘kampavata’ consists of both internal and external administration of drugs in different forms aimed to reverse the ‘vata’ imbalance.

Ayurveda was found to be an effective treatment for patients with Parkinson’s disease. Ayurveda is an ancient Indian system of medicine. It has an integrated approach to the prevention and treatment of illness and tries to maintain or re-establish the harmony between the mind, body, and forces of nature.

Several Scientific studies and clinical trials have revealed the effectiveness of Ayurveda herbs and preparations, also established the necessity of Ayurvedic cleansing procedures (Panchakarma Therapies) prior to the use of Palliative therapy.

At ‘CHARAKA’, we are offering exclusive Panchakarma therapies and researched internal medicines for treating Parkinson’s disease. These are found very effective not only in controlling the symptoms of PD but also in arresting the further progression of the disease. Quality of life can be improved drastically with these custom made therapies.

If a patient can come in the initial stages or before starting the allopathic medication, the results are wonderful.