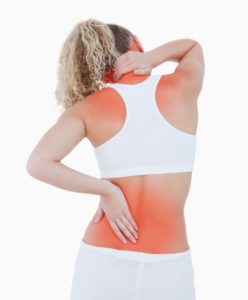 Fibromyalgia (FM) is a chronic condition that causes pain, stiffness, and tenderness of the muscles, tendons, and joints. Fibromyalgia is also characterized by restless sleep, awakening feeling tired, chronic fatigue, anxiety, depression, and disturbances in bowel function. Fibromyalgia is sometimes referred to as fibromyalgia syndrome and abbreviated FMS. Fibromyalgia was formerly known as fibrositis.

While fibromyalgia is one of the most common diseases affecting the muscles leading to chronic pain and disability, its cause is currently unknown. The painful tissues involved are not accompanied by tissue inflammation. Therefore, despite potentially disabling body pain, patients with fibromyalgia do not develop body damage or deformity. Fibromyalgia also does not cause damage to internal body organs. In this sense, fibromyalgia is different from many other rheumatic conditions (such as rheumatoid arthritis, systemic lupus, and polymyositis). In those diseases, tissue inflammation is the major cause of pain, stiffness, and tenderness of the joints, tendons and muscles, and it can lead to joint deformity and damage to the internal organs or muscles.

FMS does not involve the joints. However, it is also different from other forms of soft tissue pain known as myofascial pain syndrome, which largely involves a single muscle or muscle group. The specific diagnostic criteria of FMS include widespread pain for at least three months, affecting both sides of the body, both above and below the waist, as well as the presence of at least 11 of 18 specific tender points, also known as trigger points.

Fibromyalgia affects predominantly women (over 80% of those affected are women) between the ages of 35 and 55. Less commonly, fibromyalgia can also affect men, children, and the elderly. It can occur independently or can be associated with another disease, such as systemic lupus or rheumatoid arthritis. The prevalence of fibromyalgia varies in different countries.

The pain of fibromyalgia is generally widespread, involving both sides of the body. Pain usually affects the neck, buttocks, shoulders, arms, the upper back, and the chest. “Tender points” are localized areas of the body that are tender to light touch. Fibromyalgia tender points, or pressure points, are commonly found around the elbows, shoulders, knees, hips, back of the head, and the sides of the breastbone and are typical signs of fibromyalgia.

Fatigue occurs in 90% of patients. Fatigue may be related to abnormal sleep patterns commonly observed in these patients. Normally, there are several levels of depth of sleep. Getting enough of the deeper levels of sleep may be more important in refreshing a person than the total number of hours of sleep. Patients with fibromyalgia lack the deep, restorative level of sleep, called “non-rapid eye movement” (non-REM) sleep. Consequently, patients with fibromyalgia often awaken in the morning without feeling fully rested, even though they seem to have had an adequate number of hours of sleep time. Some patients awaken with muscle aches or a sensation of muscle fatigue as if they had been “working out” all night.

Mental and/or emotional disturbances occur in over half of people with fibromyalgia. These symptoms include poor concentration, forgetfulness, and memory problems, as well as mood changes, irritability, depression, and anxiety. Since a firm diagnosis of fibromyalgia is difficult and no confirmatory laboratory tests are available, patients with fibromyalgia are often misdiagnosed as having depression as their primary underlying problem.

Other symptoms of fibromyalgia include migraine and tension headaches, numbness or tingling of different parts of the body, abdominal pain related to irritable bowel syndrome (“spastic colon”), and irritable bladder, causing painful and frequent urination. Like fibromyalgia, irritable bowel syndrome can cause chronic abdominal pain and other bowel disturbances without detectable inflammation of the stomach or the intestines.

Each patient with fibromyalgia is unique. Any of the above symptoms can occur intermittently and in different combinations.

The cause of fibromyalgia is not known. Those affected experience pain in response to stimuli that are normally not perceived as painful. Researchers have found elevated levels of a nerve chemical signal, called substance P, and nerve growth factor in the spinal fluid of fibromyalgia patients. Levels of the brain chemical serotonin are also relatively low in patients with fibromyalgia. Studies of pain in fibromyalgia have suggested that the central nervous system (brain) may be somehow supersensitive. Scientists note that there seems to be a diffuse disturbance of pain perception in patients with fibromyalgia.

Also, patients with fibromyalgia have an impaired non-rapid eye movement, or non-REM, sleep phase (which likely, at least in part, explains the common feature of waking up fatigued and unrefreshed in these patients). The onset of fibromyalgia has been associated with psychological distress, trauma, and infection.

In 1990, the American College of Rheumatology (ACR) established two criteria for the diagnosis of fibromyalgia:

But fibromyalgia symptoms can come and go. And many doctors were uncertain about how much pressure to apply during a tender point exam. While the 1990 guidelines may still be used by researchers studying fibromyalgia, less stringent guidelines have been developed for doctors to use in general practice. These newer diagnostic criteria include:

Even though there is no blood test for fibromyalgia, blood tests are important to exclude other medical conditions. Therefore, thyroid hormone and calcium blood levels are obtained to exclude hypercalcemia, hyperparathyroidism, and hypothyroidism. The blood alkaline phosphatase (a bone enzyme) level is often raised in patients with Paget’s disease of the bone. The CPK (a muscle enzyme) level is often elevated in patients with polymyositis, a disease with diffuse muscle inflammation. Therefore, obtaining alkaline phosphatase and CPK blood levels can help the doctor decide whether Paget’s disease and polymyositis are the causes of bone and muscle pains. A complete blood count (CBC) and liver tests help in the diagnosis of hepatitis and other infections. A blood vitamin D level can detect vitamin D insufficiency. 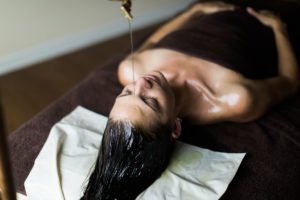 There are many factors that can be involved in the chronic pain and tenderness associated with the fibromyalgia condition. These factors are not always the same for each individual. However, in general, as per Ayurveda, the aggravation of Vata dosha (due to margavarodha) and accumulation of Ama (toxins) are the primary causes of Fibromyalgia.

It falls into a subtype of disease known in Ayurveda as vātavyādhi (diseases caused primarily by vitiated Vāta Dosha). Vātavyādhi is a disease of chronic and unpredictable nature, difficult to cure, involving primarily the musculoskeletal system and the nervous system, but in time affecting one or more additional tissues. It is described in ancient texts as manifesting with a variety of possible and changing symptoms and signs including pain, stiffness, contracture, fatigue, gradual loss of movement, and mental disturbance. This description is remarkably similar to modern description of fibromyalgia.

Primarily the pathogenesis originates in the gastrointestinal tract (anna vaha srota) then branches out through the madhyama rogamarga, the middle channels of pathogenic process of disease, with special inclination for shleshma sthana especially muscle tissues (mamsa dhatu) and their corresponding channels. Intolerability of even light touch in muscles (sparshasahyata) is a unique feature of the disease. The disease has a chronic course and malaise, anorexia, heaviness of the body, nausea, intermittent fever are responsible for gradually disabling patients.

Fibromyalgia has proven to be a difficult condition to manage due to its complexity.

But at CHARAKA, we are providing an effective treatment for Fibromyalgia.

At CHARAKA, the treatment of fibromyalgia, which is primarily a vātavyadi disease, focuses on both Vāta samshamana (re-balance) and samshodhana (purification) which become deranged due to accumulation of ama (toxins). Our treatment for Fibromyalgia includes a combination of Panchakarma therapies, researched internal medicines, strict Diet & Lifestyle modifications and stress management.