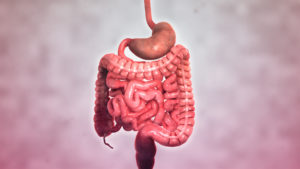 Crohn’s disease is a chronic inflammatory disease of the intestines. It primarily causes ulcerations (breaks in the lining) of the small and large intestines, but can affect the digestive system anywhere from the mouth to the anus. It causes a wide variety of symptoms like abdominal pain, diarrhea (even bloody if inflammation is severe), vomiting, weight loss. It may also cause complications outside the gastrointestinal tract such as skin rashes, arthritis, inflammation of the eye, tiredness, and lack of concentration.

Crohn’s disease is caused by interactions between environmental, immunological and bacterial factors in genetically susceptible individuals. This result in a chronic inflammatory disorder, in which the body’s immune system attacks the gastrointestinal tract possibly directed at microbial antigens. Crohn’s disease has traditionally been described as an autoimmune disease, but recent investigators have described it as an immune deficiency state.

Treatment options are restricted to controlling symptoms, maintaining remission, and preventing relapse. The disease was named after gastroenterologist Burrill Bernard Crohn, who, in 1932, together with two other colleagues at Mount Sinai Hospital in New York, described a series of patients with inflammation of the terminal ileum, the area most commonly affected by the illness.

The different subtypes of Crohn’s disease are:

Crohn’s terminal ileitis and ileo-colitis are the most common types of Crohn’s disease.

Crohn’s disease may also be categorized by the behavior of disease as it progresses.

The most common symptoms in Crohn’s disease are those related to the inflammatory damage to the digestive tract.

General symptoms occur in some but not all cases.

Other symptoms of Crohn’s disease may be attributable to related medical conditions affecting the skin, joints, mouth, eyes, liver, and bile ducts.

Many people with Crohn’s disease have symptoms for years prior to the diagnosis. The usual onset is between 15 and 30 years of age, but can occur at any age. Because of the ‘patchy’ nature of the gastrointestinal disease and the depth of tissue involvement, initial symptoms can be more subtle than those of ulcerative colitis. People with Crohn’s disease experience chronic recurring periods of flare-ups and remission.

Abdominal pain may be the initial symptom of Crohn’s disease. It is often accompanied by diarrhea, especially in those who have had surgery. The diarrhea may or may not be bloody. The nature of the diarrhea in Crohn’s disease depends on the part of the small intestine or colon involved. Ileitis typically results in large-volume, watery feces. Colitis may result in a smaller volume of feces of higher frequency. Fecal consistency may range from solid to watery. In severe cases, an individual may have more than 20 bowel movements per day and may need to awaken at night to defecate. Visible bleeding in the feces is less common in Crohn’s disease than in ulcerative colitis, but may be seen in the setting of Crohn’s colitis. Bloody bowel movements are typically intermittent, and may be bright or dark red in color. In the setting of severe Crohn’s colitis, bleeding may be copious. Flatulence and bloating may also add to the intestinal discomfort.

Symptoms caused by intestinal stenosis are also common in Crohn’s disease. Abdominal pain is often most severe in areas of the bowel with stenoses. In the setting of severe stenosis, vomiting and nausea may indicate the beginnings of small bowel obstruction. Although the association is greater in the context of ulcerative colitis, Crohn’s disease may also be associated with primary sclerosing cholangitis, a type of inflammation of the bile ducts, but it is more commonly associated with Ulcerative Colitis.

Crohn’s disease, like many other chronic, inflammatory diseases, can cause a variety of systemic symptoms. Among children, growth failure is common. Many children are first diagnosed with Crohn’s disease based on inability to maintain growth. As it may manifest at the time of the growth spurt in puberty, up to 30% of children with Crohn’s disease may have retardation of growth.

Fever may also be present, though fevers greater than 38.5 ˚C (101.3 ˚F) are uncommon unless there is a complication such as an abscess. Among older individuals, Crohn’s disease may manifest as weight loss, usually related to decreased food intake, since individuals with intestinal symptoms from Crohn’s disease often feel better when they do not eat and might lose their appetite. People with extensive small intestine disease may also have malabsorption of carbohydrates or lipids, which can further exacerbate weight loss.

In addition to systemic and gastrointestinal involvement, Crohn’s disease can affect many other organ systems. Inflammation of the interior portion of the eye, known as Uveitis, can cause eye pain, especially when exposed to light. Inflammation may also involve the white part of the eye (sclera), a condition called Episcleritis. Both Episcleritis and Uveitis can lead to loss of vision if untreated.

Crohn’s disease is associated with a type of rheumatologic disease known as Seronegative Spondyloarthropathy. This group of diseases is characterized by inflammation of one or more joints (Arthritis) or muscle insertions (Enthesitis). The arthritis can affect larger joints, such as the knee or shoulder, or may exclusively involve the small joints of the hands and feet. The arthritis may also involve the spine, leading to Ankylosing Spondylitis if the entire spine is involved or simply Sacroiliitis if only the lower spine is involved. The symptoms of arthritis include painful, warm, swollen, stiff joints and loss of joint mobility or function.

Crohn’s disease can also cause neurological complications (reportedly in up to 15% of patients). The most common of these are seizures, stroke, myopathy, peripheral neuropathy, headache and depression.

In the oral cavity crohn’s patients may suffer from Cheilitis granulomatosa and other forms of orofacial Granulomatosis, Pyostomatitis vegetans, recurrent Aphthous stomatitis, geographic tongue and migratory Stomatitis in higher prevalence than the general population.

Crohn’s disease also increases the risk of cancer in the area of inflammation. Individuals with Crohn’s disease involving the small bowel are at higher risk for small intestinal cancer. Similarly, people with Crohn’s colitis have a relative risk of 5.6 for developing colon cancer.

Individuals with Crohn’s disease are at risk of malnutrition for many reasons, including decreased food intake and malabsorption. The risk increases following resection of the small bowel. Such individuals may require oral supplements to increase their caloric intake, or in severe cases, total parenteral nutrition (TPN).

Crohn’s disease seems to be caused by a combination of environmental factors and genetic predisposition. Researchers believe that in Crohn’s disease the immune system attacks bacteria, foods, and other substances that are actually harmless or beneficial. During this process, white blood cells accumulate in the lining of the intestines, producing chronic inflammation, which leads to ulcers, or sores, and injury to the intestines.

The increased incidence of Crohn’s in the industrialized world indicates an environmental component. Crohn’s is associated with an increased intake of animal protein, milk protein and an increased ratio of omega-6 to omega-3 polyunsaturated fatty acids. Those who consume vegetable proteins appear to have a lower incidence of Crohn’s disease. Smoking increases the risk of the return of active disease (flares). The introduction of hormonal contraception in the United States in the 1960s is associated with a dramatic increase in incidence, and one hypothesis is that these drugs work on the digestive system in ways similar to smoking. Emotional stress is likely to exacerbate Crohn’s.

The following tests may help in the diagnosis: 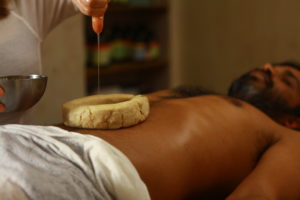 Ayurveda, the holistic science of India, places a lot of emphasis of the care of the digestive system. Ayurvedic concepts particularly focus on the significance of healthy digestive system with regard to the overall balanced functioning and healthiness of the human body and mind. Healthy digestion ensures that the nutrients taken in through food are able to produce healthy tissues (Saptha Dhathus). When digestion is weak, the tissues of your body – including muscle, blood, bone and nerves – become weak and susceptible to disease.

According to Ayurveda, Crohn’s can be compared to ‘Grahani’ disease. Grahani in Ayurveda, is actually an anatomical term to describe small intestines (specifically Ileum and jejunam). Any vitiation or inflammation to this particular part by imbalanced Doshas (Vata, Pitta, Kapha) can cause a wide variety of symptom similar to that of Crohn’s disease, anywhere across the digestive system. Degree and nature of symptoms may vary as per the doshic predominance & involvement.

As per Ayurveda, primary causes of Grahani disease are Mandagi (poor appetite and poor digestion), irregular, improper, irrelevant or incompatible diet habits and junk food. Non-following of the healthy diet habits (Pathya) in certain digestive disorders, especially the conditions of post diarrhea and irritable bowels, are also one of the important causes of this disease.

At CHARAKA, we are providing very effective treatment for Crohn’s disease based on the classical principle of Ayurveda and our research. Treatment involves internal research medicines, strict diet regime and life style modifications. In more severe and chronic cases, Panchakarma therapy is selectively done along with these.

If the patient is already on allopathic treatment, Ayurveda treatment can be clubbed initially and gradually allopathic medicines can be tapered down.

Usually results are very good with Ayurvedic line of treatment. Early cases tend to respond quickly than chronic. If patient can stick to all the guidelines as advised, even complete cure can also be achieved.