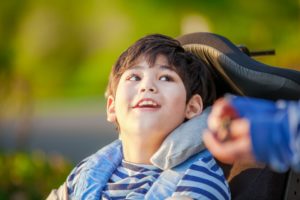 Cerebral Palsy (CP) is a disorder that affects muscle tone, movement, and motor skills (the ability to move in a coordinated and purposeful way). Cerebral palsy is caused by damage to the motor control centers of the developing brain and can occur during pregnancy, during childbirth, or after birth up to about age three. About 2% of all cerebral palsy cases are believed to be due to a genetic cause. Cerebral palsy is not an infectious disease and is not contagious. Most cases are diagnosed at a young age rather than during adolescence or adulthood.

There is no cure for CP, but treatment, therapy, special equipment, and, in some cases, surgery can help a child who is living with the condition.

Cerebral palsy is one of the most common congenital (existing before birth or at birth) disorders of childhood.

The three types of CP are:

Cerebral palsy affects muscle control and coordination, so even simple movements like standing still are difficult. Other vital functions that also involve motor skills and muscles such as breathing, bladder and bowel control, eating, and learning may also be affected when a child has CP. Cerebral palsy does not get worse over time.

Kids with CP have varying degrees of physical disability. Some have only mild impairment, while others are severely affected. This depends on the extent of the damage to the brain. For example, brain damage can be very limited, affecting only the part of the brain that controls walking, or can be much more extensive, affecting muscle control of the entire body.

The brain damage that causes CP can also affect other brain functions, and can lead to other medical issues. Associated medical problems may include visual impairment or blindness, hearing loss, food aspiration (the sucking of food or fluid into the lungs), gastroesophageal reflux (spitting up), speech problems, drooling, tooth decay, sleep disorders, osteoporosis (weak, brittle bones), and behavior problems.

Seizures, speech and communication problems and mental retardation are more common among kids with the most severe forms of CP. Many have problems that may require ongoing therapy and devices such as braces or wheelchairs.

The exact causes of most cases of CP are unknown, but many are the result of problems during pregnancy in which the brain is either damaged or doesn’t develop normally. This can be due to infections, maternal health problems, a genetic disorder, or something else that interferes with normal brain development. Problems during labor and delivery can cause CP in some cases.

Premature babies particularly those who weigh less than 1,500 grams (3.3 pounds) have a higher risk of CP than babies that are carried full-term, as are other low birth weight babies and multiple births, such as twins and triplets.

Brain damage in infancy or early childhood can also lead to CP. A baby or toddler might suffer this damage because of lead poisoning, bacterial meningitis, malnutrition, being shaken as an infant (shaken baby syndrome), or being in a car accident while not properly restrained.

Signs and symptoms can vary greatly. Movement and coordination problems associated with cerebral palsy may include:

The disability associated with cerebral palsy may be limited primarily to one limb or one side of the body, or it may affect the whole body. The brain disorder causing cerebral palsy doesn’t change with time, so the symptoms usually don’t worsen with age, although the shortening of muscles and muscle rigidity may worsen if not treated aggressively.

CP may be diagnosed very early in an infant known to be at risk for developing the condition because of premature birth or other health problems. Doctors, such as pediatricians and developmental and neurological specialists, usually follow these kids closely from birth so that they can identify and address any developmental delays or problems with muscle function that might indicate CP.

In a baby carried to term with no other obvious risk factors for CP, it may be difficult to diagnose the disorder in the first year of life. Often doctors aren’t able to diagnose CP until they see a delay in normal developmental milestones (such as reaching for toys by 4 months or sitting up by 7 months), which can be a sign of CP.

Abnormal muscle tone, poorly coordinated movements, and the persistence of infant reflexes beyond the age at which they are expected to disappear also can be signs. If these developmental milestones are only mildly delayed, the diagnosis of CP may not be made until the child is a toddler.

Once diagnosed with cerebral palsy, further diagnostic tests are optional. Neuroimaging with CT or MRI is warranted when the cause of cerebral palsy has not been established. MRI is preferred over CT due to diagnostic yield and safety. When abnormal, the neuroimaging study can suggest the timing of the initial damage.

If the child has seizures, an electroencephalogram (EEG) will be done to determine if he or she has epilepsy, which often occurs in people with cerebral palsy.

Muscle weakness, muscle spasticity and coordination problems can contribute to a number of complications either during childhood or later during adulthood, including:

Management of cerebral palsy always remained a quest for the physicians all over the world. Even with introduction of newer and better possible ways to improve the functions of the child so that the quality of life is improved but still is a challenge for them.

Cerebral palsy cannot be correlated with any single disease or condition mentioned in Ayurveda, as it is a multi-factorial disease. Classical signs and symptoms of CP will fit into criteria of Vata vyadhi spectrum(Vata predominant disease). Hence Vata vyadhi chikitsa will prove beneficial.

Overall goal of treatment is to help the individual with cerebral palsy reach his or her greatest potential physically, mentally, and socially. It is to improve the quality of life by establishing optimal independence.

Treatment at CHARAKA for CP involves intensive Panchakarma therapy program along with researched oral medicines. Therapies like Abhyanga swedam, Nasyam, Pichu, Shirodhara, Pizhichil, Navara or mamsakizhi, Vasti are done based on the presentation and suitablity. Duration of therapy could range from 3 weeks to 5 weeks. Oral medicines will be continued for 2 - 3 years.

Repetition of therapies in small courses either individual or in combination intermittently will yield great benefit and stands as long term support for CP child.