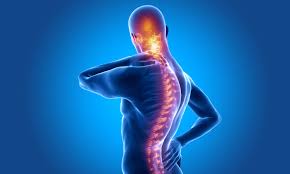 Ankylosing spondylitis belongs to a group of rheumatic diseases known as the spondyloarthropathies (SpA), which show a strong association with the genetic marker HLA-B27.

Ankylosing spondylitis is also a systemic disease which can affect other tissues, throughout the body. Accordingly, it can cause inflammation or injury to other joints away from the spine, as well as to other organs, such as the eyes, heart, lungs, and kidneys. Ankylosing spondylitis shares many features with several other arthritis conditions such as psoriatic arthritis, reactive arthritis (formerly called Reiter’s disease), and arthritis associated with Crohn’s disease and ulcerative colitis. Each of these arthritic conditions can cause disease and inflammation in the spine, other joints, eyes, skin, mouth, and various organs. In view of their similarities and tendency to cause inflammation of the spine, these conditions are collectively referred to as “Spondylo arthropathies”. Ankylosing spondylitis is considered one of the many rheumatic diseases because it can cause symptoms involving muscles and joints.

Men are affected more than women by a ratio about of 3:1. In women, joints away from the spine are more frequently affected than in men. Ankylosing spondylitis affects all age groups, including children. When it affects children, it is referred to as Juvenile ankylosing spondylitis.

It is important to note that the course of Ankylosing spondylitis varies greatly from person to person. So too can the onset of symptoms. The most common age of onset of symptoms is in the second and third decades of life. 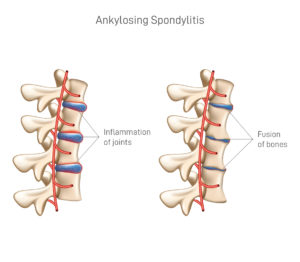 The symptoms of Ankylosing spondylitis are related to inflammation of the spine, joints, and other organs. Fatigue is a common symptom associated with active inflammation. Inflammation of the spine causes pain and stiffness in the low back, upper buttock area, neck, and the remainder of the spine. The onset of pain and stiffness is usually gradual and progressively worsens with loss of range of motion noticeable over months. Occasionally, the onset is rapid and intense.

In the early stages of AS, there may be mild fever, loss of appetite and general discomfort. Lumbar pain (low back pain) and buttock pain are common manifestations of active inflammation in the lumbar spine and sacroiliac joints. The symptoms of pain and stiffness are often worse in the morning or after prolonged periods of inactivity. Motion, heat, and a warm shower often eases pain and stiffness in the morning.

Those who have chronic, severe inflammation of the spine can develop a complete bony fusion of the spine (ankylosis). Once fused, the pain in the spine disappears, but the affected individual has a complete loss of spine mobility. These fused spines are particularly brittle and vulnerable to breakage (fracture) when involved in trauma such as motor-vehicle accidents. A sudden onset of pain and mobility in the spinal area of these patients can indicate bone breakage. The lower neck (cervical spine) is the most common area for such fractures.

Chronic spondylitis and ankylosis cause forward curvature of the upper torso (thoracic spine), which limits breathing capacity. Spondylitis can also affect the areas where ribs attach to the upper spine, further limiting lung capacity. Ankylosing spondylitis can cause inflammation and scarring of the lungs, causing coughing and shortness of breath, especially with exercise and infections. Therefore, breathing difficulty can be a serious complication of Ankylosing spondylitis.

People with Ankylosing spondylitis can also have arthritis in joints other than the spine. This feature occurs more commonly in women. Patients may notice pain, stiffness, heat, swelling, warmth, and/or redness in joints such as the hips, knees, and ankles. Occasionally, the small joints of the toes can become inflamed or “sausage” shaped. Inflammation can occur in the cartilage around the breastbone (costochondritis) as well as in the tendons where the muscles attach to the bone (tendinitis) and in ligament attachments to bone. Some people with this disease develop Achilles tendinitis, causing pain and stiffness in the back of the heel, especially when pushing off with the foot while walking upstairs. Inflammation of the tissues of the bottom of the foot, plantar fasciitis, occurs more frequently in people with Ankylosing spondylitis.

Other areas of the body affected by Ankylosing spondylitis include the eyes, heart, and kidneys. Patients with Ankylosing spondylitis can develop inflammation of the iris (iritis), the colored portion of the eye. Iritis is characterized by redness and pain in the eye, especially when looking at bright lights. Recurrent attacks of iritis can affect either eye. In addition to the iris, the ciliary body and choroid of the eye can become inflamed (uveitis). Iritis and uveitis can be serious complications of Ankylosing spondylitis that can damage the eye and impair vision and may require an eye specialist’s (ophthalmologist) urgent care.

A rare complication of Ankylosing spondylitis involves scarring of the heart’s electrical system, causing an abnormally slow heart rate (referred to as heart block). A heart pacemaker may be necessary in these patients to maintain adequate heart rate and output. In others, the part of the aorta closest to the heart can become inflamed, resulting in leakage of the aortic valve. In this case, patients can develop shortness of breath, dizziness, and heart failure.

Advanced spondylitis can lead to deposits of protein material called amyloid into the kidneys and result in kidney failure. Progressive kidney disease can lead to chronic fatigue and nausea and can require removal of accumulated waste products in the blood by a filtering machine (dialysis). 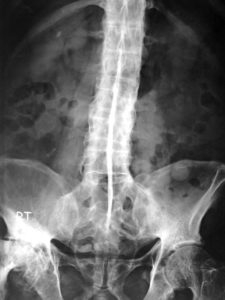 There is no direct test to diagnose AS. A clinical examination, MRI and X-ray studies of the spine, which show characteristic spinal changes and sacroiliitis, and a simple genetic marker blood test are the major diagnostic tools. A drawback of X-ray diagnosis is the signs and symptoms of AS have usually been established as long as 8–10 years prior to X-ray-evident changes occurring on a plain film X-ray, which means a delay of as long as 10 years before adequate therapies can be introduced. Options for earlier diagnosis are tomography and magnetic resonance imaging of the sacroiliac joints, but the reliability of these tests is still unclear.

During acute inflammatory periods, AS patients will sometimes show an increase in the blood concentration of C-reactive protein (CRP) and an increase in the erythrocyte sedimentation rate (ESR), but there are many with AS whose CRP and ESR rates do not increase, so normal CRP and ESR results do not always correspond with the amount of inflammation a person actually has. Sometimes people with AS have normal level results, yet are experiencing a significant amount of inflammation in their bodies.

Variations of the HLA-B gene increase the risk of developing Ankylosing spondylitis, although it is not a diagnostic test. Those with the HLA-B27 variant are at a higher risk than the general population of developing the disorder. HLA-B27, demonstrated in a blood test, can occasionally help with diagnosis, but in itself is not diagnostic of AS in a person with back pain. Over 95% of people that have been diagnosed with AS are HLA-B27 positive, although this ratio varies from population to population. 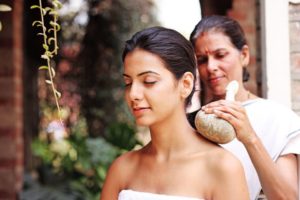 In Ayurveda, Ankylosing Spondylitis fall under the broader perspective of 'Ama Vata' (Inflammatory or Rheumatic disorders). It is primarily because of the imbalance of Vata and Kapha Doshas but some times can be because imbalance of three Doshas as well.

Ayurveda offers excellent guidelines, medicines and therapies for treating Ankylosing spondylitis. The strength of Ayurveda in the area of spine and joint treatments is globally appreciated. Since it addresses the root cause of the issue, the results are fantastic.

Ayurveda has in-depth knowledge of causative factors of AS and clearly explained the pathogenesis and line of treatment to be followed.

At CHARAKA, with our deep understanding and research on the fundamentals, we are providing a very effective treatment methodology based on the classical texts of Ayurveda. Treatment is usually aggressive, long-term and requires regular and careful follow-ups. The treatment comprises of a series of purification procedures for Detoxification through world renowned Ayurveda Panchakarma therapies along with the administration of researched medicines internally.

Panchakarma procedures usually requires around 60 – 90 days based on the severity & chronicity of the disease. Strict diet restrictions along life style modification are essential parts of the therapy. Following the diet as advised not only helps in recovering fast but also in prevents further worsening of the condition.

If patient comes for the treatment in early stages, even total cure is also possible.