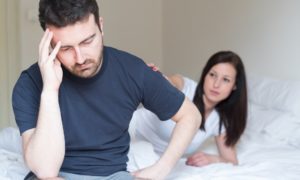 Premature Ejaculation (PE) is uncontrolled ejaculation either before or shortly after sexual penetration, with minimal sexual stimulation and before the person wishes. It may result in an unsatisfactory sexual experience for both partners. This can increase the anxiety that may contribute to the problem. Premature ejaculation is one of the most common forms of male sexual dysfunction and has probably affected every man at some point in his life.

The vas deferens (the tubes that store and transport sperm from the testes) contract to squeeze the sperm toward the base of the penis through the prostate gland. The seminal vesicles release secretions that combine with the sperm to make semen. The ejaculation is unstoppable at this stage.

The muscles at the base of the penis contract forcing semen out of the penis (ejaculation and orgasm) while the bladder neck contracts. Orgasm can occur without the delivery of semen (ejaculation) from the penis. Normally, erections are lost following ejaculation.

Most cases of premature ejaculation do not have a clear cause.

With sexual experience and age, men often learn to delay orgasm. Premature ejaculation may occur with a new partner, only in certain sexual situations, or if it has been a long time since the last ejaculation.

Psychological factors also commonly contribute to PE. Temporary depression, stress, unrealistic expectations about performance, a history of sexual repression, or an overall lack of confidence can cause PE. Interpersonal dynamics may contribute to sexual function. PE can be caused by a lack of communication between partners, hurt feelings, or unresolved conflicts that interfere with the ability to achieve emotional intimacy.

In some cases, premature ejaculation may be related to a medical cause such as hormonal problems, injury, Inflammation and infection of the prostate or urethra, Nerve damage from surgery or trauma or a side effect of certain medicines.

The main symptom of premature ejaculation is an uncontrolled ejaculation either before or shortly after intercourse begins. Ejaculation occurs before the person wishes it, with minimal sexual stimulation.

Premature ejaculation is a self-reported diagnosis.

The opinion of a partner can provide a significant contribution to clinician understanding. A complete description is essential in distinguishing PE from ED, i.e., the inability to attain or maintain an erection, because these conditions frequently coexist. Moreover, some men are unaware that loss of erection after ejaculation is normal; thus, they may erroneously complain of ED when the actual problem is PE.

Laboratory or physiological testing is not required unless the history and a physical examination reveal indications beyond uncomplicated PE. 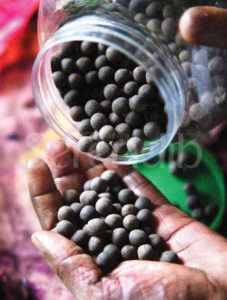 According to the principles and philosophy of Ayurvedic medicine, PrematureEjaculation is caused due to aggravated Vata. The Prakupita Vata enters into Shukra dhatu and causes early ejaculation. It comes under the gatatva concept of vata characterized by a group of clinical presentations, which include ejaculatory as well as seminal impairments is referred as Shukragatavata or Shukravritavata.

In Ayurveda, Vata is explained as life and vitality, supporter of the all embodied beings and sustain long life, free of disorder. Shukra is the terminal tissue element of the body, which is considered as the Saara (essence) of all other tissue elements and nourishes of the supreme vital essence (Ojas). Both concepts attained superior considerations in Ayurveda classics.

Ayurveda being the ancient unique system of medicine aims not only curing but preventing the disease too. Line of treatment of Shukragatavata or Premature ejaculation is Vatahara chikista (vata pacifying treatment), admistration of Vajeekarana (aphrodisiac) and Shukrastambhaka (medicines which delay the ejaculation or arrests premature ejaculation) dravyas or oushadhis.

At CHARAKA, we are providing highly successful treatments for curing Premature Ejaculation based on the knowledge shared by the classical texts of Ayurveda and through research based medicines. Most of the people respond to the oral medicines itself, while some people may require Panchakarma therapies.